The US Open showcases who of the top echelon of players is really on their game. Two months since the Masters the Chambers Bay site for the Open suggested that only the best would survive, after they were required to dual in a converted gravel pit, that looked like a slice of a Scottish links course, with the added difficulty of tackling a mountain bike track set up for the Olympics.

Fox Sport and the Golf Channel spent many preview minutes pondering whether Phil Mickelson would win his first US Open, if Tiger could pull out of his nose dive of bad form and would Rory after two missed cuts in Europe, prove that he is the greatest of the new breed.

As June closes most of these questions have been answered.

Jordan Spieth is golf’s hottest property. Rory has a few weeks to tune up for St Andrews and protect his # 1 spot, while Phil’s big achievement this month is that he is now # 36 in the Forbes rich list of celebrities and professional sports people, with an annual income of 51.5 million. Tiger clings on to 37th spot with 50 million. Not bad for someone who can’t find the fairway and has trouble chipping! Problems I think I could cope with easily!!!

He is not even on the Forbes list yet!!!  But Rory is.

Thankfully for those of us not fully conversant with “streaming “ or not wanting to pay more money on top of Sky’s monthly bill, we have been able to watch the USGA events as we have in the past.

A double whammy for back to back with the US Open we the have had US Senior Championship too.

There in the field was one of New Zealand’s golfing stars of 20 years ago, Grant Waite. What a performance he put up, finishing third with Germany’s icon Bernard Langer.

For the record the title was won by Jeff Maggert United States from last years champion Colin Montgomerie of Scotland.

Maggett has always been a sweet swinger of a golf club and in his younger days made a couple of runs on the final day in the US Open. But inconsistent putting kept him from being in the top bracket. But now in the 50 plus bracket he has a new lease of life and his Open victory was the second Senior Major won this year, having picked up the Regions Tradition, a month ago.

Unfortunately Waite got little airtime from Fox’s golf producers, although he was the only player in the field to shoot four rounds under 70 in the championship.

Grant Waite qualified for the Senior Tour last November when he turned 50 and went through the demands of the tough qualifying school.

To gain a place in the Senior Open field he won one of three positions available in final qualifying on May 29th, with a birdie on the last hole.

Born and raised in Palmerston North , he attended University of Oklahoma on a golfing scholarship and turned pro in 1987. He won the NZ Open in 1992 and gained his only victory on the PGA United States tour with a win in the 1993 Kemper Open. He chased Tiger Woods all the way in the 2000 Canadian Open to finish second. Represented New Zealand in the Dunhill and World Cups between 1989 and 2000.

Grant has been a professional teacher in the United States over the last few years teaming up with Joseph Mayo. He has gained a very good reputation and acceptance within his craft.

Here’s something of interest.

John Coyne is an avid golf historian and author. His latest book, The Caddie who won the Masters is a fascinating read, worth hunting down, probably best via Amazon.

This latest piece has been posted by the blog: Armchair Golfer

THE SERIES OF SHORT PIECES entitled “Bad Boy Bobby Locke” that I published on this blog last year has drawn the attention of players who remember one of the greats of the game. It has also drawn the attention of Locke’s extended family, an aging relative who wants to, and rightly so, correct errors in the history of South Africa’s first famous golfer and set (finally!) Bobby Locke’s personal record straight.

This close family member has gone to original military service records of which I have received proper copies. Now we have, in a well-documented, yet to be published, article entitled, “Arthur D’Arcy (Bobby) Locke — Second World War Record,” covering the period 1939 to 1945. The report was written by Alfred Pratt, a relative who was raised in the Locke family household.

As Pratt writes in a brief introduction:

Arthur D’Arcy ‘Bobby’  Locke was born on 20th November 1917 at Germiston in the Transvaal, South Africa. His parents were Charles James Locke, profession Gents Outfitter (Retail), and his mother Olive Locke, (nee Harrison) lifelong mother and housewife. His father was born in Belfast, Northern Ireland, and his mother in Cape Town. Her family originated in England and Ireland and the first of them, arrived in Cape Town in 1822.  Locke died in Johannesburg on 9th March 1987 after a short illness, spinal meningitis. He is generally acknowledged as one of the all-time ‘Greats of Golf’ and the finest putter of all up to and including his lifetime.

While all of these facts are not in question, Bobby Locke’s personal history became tangled up and distorted over the years because of a series of misquotes, fabrications and enhancements — by Locke himself and others. That inaccurate history sullies the real achievements by Locke on many golf courses around the world.

Alfred Pratt has cleared up the history, at least of Locke’s war record that had him flying hundreds of dangerous missions, quoting exaggerated and erratic flying hours claims, in the Middle East and Europe, living in Egypt, and emerging as a heroic fighter and bomber pilot in WWII for the South African Air Force.

As Pratt wrote me, “It became obvious some years ago that the ‘stories’ of Bobby Locke and his heroic war service did not match certain known facts. For example, family members knew that he was posted to Port Elizabeth after his marriage in 1943 and well into 1944 and that he could not possibly have been in Egypt at the time as he claimed in 1943. We all knew that he did not suffer from shell-shock or any post operational stress disorder.”

His taciturn behavior on the golf course was assumed in his calm, calculated methods of mental focus (one of his greatest strengths) and he never shifted his weight from left to right foot and back as “he was accustomed to in aiming his bomber and its load at hostile targets — sinking his putts by using old flying habit methods”!  Furthermore, he could not have suffered anguish and guilt complex at the screams and moans of his dying victims bombed at Monte Cassino, an operation carried out, solely, by the U.S. Army Air Force at a time when he was still based in South Africa.

Pratt, in 1993, began to set the record straight, and researched with Colonel Graham du Toit, an acknowledged military researcher and expert on the South African Air Force, the Locke war record obtained from the Department of Defense, Pretoria, South Africa.

Pratt goes on to say, “The simple acid test was to obtain the facts from his SAAF service record and make direct comparisons with his own reports and the rumors generated amongst others.”

According to Pratt’s research, Locke’s final posting as a freshly qualified co-pilot on twin engine Wellington Bombers was to Italy three days after hostilities had ceased on 8th May 1945. Locke only spent a few weeks with Number 31 Squadron (a four engine, Liberator equipped squadron) before being posted home for demobilization. He further exaggerated his total length of his SAAF service period against the proven facts.

Locke purposely omitted any mention of the problems, the employment he had at Macauvlei Country Club and the circumstances of his dismissal, as well as ignoring the episode completely from his book. He covered  the elapsed time in 1938 and from his return arrival from England in 1939 to late 1940 with a tissue of lies about his arrangements with Vereeniging Country Club and the dates covered, pretending that his arrangements went back further in time than they did.

Family members also knew that he was “slow” in joining up in the S.A. Forces when his fellow South Africans were volunteering in droves. Meanwhile, Locke was virtually unemployed with no tournaments or championships available to him except by going to America, which had been his plan while still employed at Macauvlei. He, belatedly, decided to sign up for the South African Air Force.

Locke’s nephew concludes in his article — which is perhaps the real reason he had gone to such lengths in his research on Bobby Locke — that while his uncle was qualified to fly a variety of airplanes, and spent much of his time instructing other pilots to do the same, and did serve just under five years in the S.A.A.F, “his work in training others to fly warplanes is not questioned nor is his teaching effort being challenged or denigrated in the slightest. But in any reasonable view, heaping unfounded praises and acclamations on any undeserving individual in these circumstances constitutes an insult to those who gave their lives, heroically or not, the wounded and active combat personnel, sung and unsung in defense of their countries.”

Historian Pratt’s research and family knowledge was used by Craig Urquhart in his 2014 book entitled, The Kings of Swing: Behind the Scenes with South Africa’s Golfing Greats.

While Bobby Locke’s war record has been correctly documented by the careful and detailed research done by Alfred Pratt and Colonel Graham du Toit, what remains in mystery is, perhaps to golfers and golf fans, a much more interesting question:

It seems to have disappeared without a trace and been supplanted by a host of lookalikes and replicas all over the world. But did it? 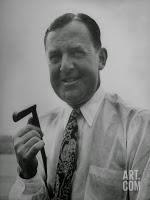 Bobby Locke with his famous flatstick.

John Coyne is a bestselling author whose latest golf novel is The Caddie Who Won the Masters. Learn more at John Coyne Books.

Posted by The Armchair Golfer at 11:21 AM