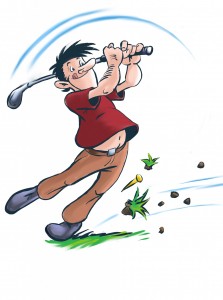 It’s the first time the US Open has been played in the Pacific North West and Chambers Bay is sure to raise a few traditional eyebrows.

The course was opened in 2007 and designed by the Robert Trent Jones II Company and within a year the USGA had awarded the venue the 2010 US Amateur and 2015 US Open.

It is not one of your posh closed courses that have featured on other Open locations that can only be played by a few, Chambers Bay is Municipal facility open to everyone.

All the tee boxers are over 50 metres long!

So where is Chambers Bay? It’s in Puget Sound an hour drive south from Seattle; 30 minutes drive from Tacoma and an 8-minute drive from University Place a city of 30 thousand. Get your old school Atlas out and have a look.

Chambers Bay was an old gravel and sand quarry, now a 105-hectare golf course and a 365-hectare parkland, with walking tracks.

His son Robert Trent Jones II continues the legacy of his father, who died aged 93 in 2000.

At Chambers Bay they have designed something quite unique and exceptional. On Puget Sound with the backdrop of sea and land, a visitor could be mistaken they were not in Scotland, viewing the distinct style of a famous seaside links course.

The weather can be just as fickle too, at 47 degrees north the local climate in Puget Sound, can have all the variables found in the Home of Golf.

It is a strictly walking course only, no carts and this has allowed the designers to use the deep-rooted fescue grass from tee to green. Drought tolerant the grass is ideal for sustainable golf, with less demand for excessive watering.

Now add the bunkers, the rolling fairways with varying lies and the subtle contours of the greens and you have the challenge of Chambers Bay.

In this modern age it is hard to believe that 9882 golfers entred for this years US Golf Open. Entries came from 50 States, District of Columbia, Puerto Rico and 63 other countries. A true Major that is open to anyone with a handicap of 1.4 or less, professionals or amateurs.

Qualifying is over two levels, local over 18 holes and sectional over 36. Including two overseas sites, in England and Japan.

49 golfers are exempt, including the No 1 ranked amateur in the world and the current holder of the USA Amateur Championship. A further 60 exempt players will be added on May 25th and June 15th from the list of the top 60 players and ties, in the World Rankings.

Golf Digest has just completed a golf ball test. What do you want from your ball? Distance, wanting to smash it?

Be surprised, ball makers are going for feel off the clubface.

Softer balls are the rage 0 for pros and handicap golfers.

May all your putts find gravity?

See you again in June